My ‘First and Last Light in Freeville’ collection was on display in the lobby of the Alternative Federal Credit Union in Ithaca, during the month of August. I’ve been a member of this credit union since 1981 so it was nice to have so many friends and community members get to see  the fauxtos as they passed through the lobby. I included a summer night scene and moon rise in this grouping. This was the first of two “blue moons” in July, 2015. There were a lot of nice comments written in the Guest Book. Thanks to everyone who took the time to write. 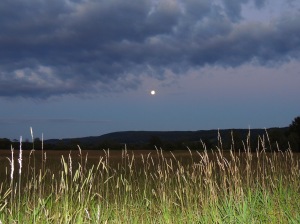 Next up: I have donated ‘Night portrait cumulus cloud in the east Aug 14, 2015‘ to the annual Auction held by the Tompkins County Chamber of Commerce, Oct. 28, 2015 at Coltivare in Ithaca. When I posted this to FB it got tons of likes. I’m encouraging other artists to donate things that enrich our lives, but you’ll also find a lor of great commodities and services in the Auction.